Holds a Ph.D. in Economics from the University of London and was a recipient of a number of educational awards and scholarships from the Greek Government, the Bank of Greece, and the “Alexander S. Onassis” Foundation. He has served as Senior Economist in the Research Department of the Bank of Greece, a Professor at Deree College and a Member of the Council of Economic Advisors to the Mayor of Athens.

He joined Intracom in 1994 and has been Intracom Group’s CFO and a member of the Board of Directors since 1995. He has served as General Manager, Finance & Administration (1995-2004), Executive General Manager of the Corporate Center (2005-2006), Executive Director, Group Financial Management (2006-2011) and Vice-Chairman & Deputy CEO (2011-2013). In 2014 he was appointed Chairman of the BoD of Intracom Holdings and of most subsidiary boards as well. From July 2016 to December 2018, he was Intracom Holdings Chairman and CEO. Since December 2018, he is Vice Chairman and CEO. 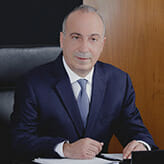 Dr. George Troullinos serves as Vice-Chairman of the B.o.D. and CEO of INTRACOM DEFENSE (IDE), the leading defense company in Greece. He holds a Ph.D. in Electrical Engineering from Georgia Institute of Technology, Atlanta, USA, and conducted Business Administration studies at Rice University, Houston, USA.

Dr. Troullinos has developed a number of telecommunications systems and applications and has published various papers in the areas of Automatic Control, Communications and Digital Signal Processing, in international scientific journals and fora, such as the IEEE Transactions and IEEE International Conferences. He was presented with the “President’s Fellowship”, the “Sigma Xi Award for Outstanding Research” and the “Sigma Xi Master of Science Award” and is a member of the Scientific Honour Societies “Tau Beta Pi”, “Eta Kappa Nu”, “Phi Kappa Phi” and “Gamma Beta Phi”. 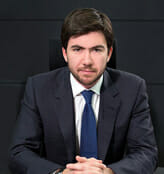 Before joining Intracom Holdings he served as Corporate Strategy Director, Deputy Executive Officer (2009-2013) and CEO of Hellas Online a leading provider of broadband and fixed-line telephony in Greece, until November 2014 when the company was acquired by Vodafone Greece.

In 2014, he was elected member of the Board of Directors of the Hellenic Federation of Enterprises (SEV).He holds a BSc degree in International Relations and Economics from Boston University and an Executive Graduate Diploma in Finance from Columbia University.

Konstantinos Palmos,
Member of the B.o.D. Konstantinos Palmos joined INTRACOM GROUP in September 1993. He has served in financial departments of INTRASOFT S.A. and INTRACOM S.A. in several key positions.

He holds a BA Degree from the Economic University of Athens and he is licensed by OEE as class A for the Financial Professional.