An indicative list of National and  European Research projects follows:

IDE participates in OCEAN2020, the most important project related to the first European Defense Fund’s initiative to boost Europe’s defence capabilities. The project was issued by the European Union under the ‘Preparatory Action on Defense Research’ and was selected for funding through a competitive procedure that was conducted by the European Defense Agency.The OCEAN2020 team, which is led by Leonardo, comprises of 42 partners from 15 European countries, including the Ministries of Defense of Italy, Greece, Spain, Portugal and Lithuania, with additional support from the Ministries of Defense of Sweden, France, the United Kingdom, Estonia and the Netherlands.OCEAN2020 is the first example of a cross-European military research program. It will integrate unmanned platforms of different type (fixed wing, rotary wing, surface and underwater) with naval units’ command and control centers, allowing data exchange via satellite with command and control centers on land. It will involve two live demonstrations of maritime surveillance and interdiction operations in the Mediterranean and Baltic Sea, conducted by European fleets using unmanned aircraft, surface vessels and underwater systems.IDE provides to the consortium the SeaRider Unmanned Surface Vehicle (USV) that will be used in the maritime surveillance and interdiction operations in the Mediterranean Sea. IDE is also responsible for different tasks related to the requirements analysis of the USVs, to the communication architectures and technologies that will be used in the consortium and to the security of communications (COMSEC) and information (INFOSEC). Moreover, IDE will be the single Point of Contact of the whole consortium with the Greek Ministry of Defense. 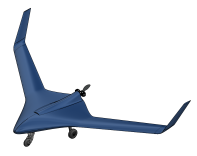 The main goal of the DELAER RX-3 research project is the design, development, manufacturing and flight testing of a prototype Unmanned Aerial Vehicle System (UAS), which will provide direct support to Greek isolated territories and islands, via aerial delivery of lifesaving supplies and dedicated equipment. The system will be based on a large-scale, autonomous, fixed-wing, novel Blended Wing Body (BWB) Unmanned Aerial Vehicle (UAV) configuration, as well as a portable ground control station (GCS).​ The DELAER RX-3 mission involves cruising to the point of interest, payload delivery, and cruising back to the base of operations.​

IDE is responsible for the communication system, the electronics of the vehicle and the Ground Control Station. State-of-the-art electronics and telecommunication systems will be developed in order to satisfy the operational requirements and they will be capable of operating under adverse weather and environmental conditions. The aerial vehicle will communicate with the GCS through encrypted radio-communications. A data gathering and management software will also support the operations of the DELAER RX-3 system.

The DELAER program is funded by the General Secretariat for Research and Technology (GSRT) and is being implemented by a consortium consisting of the Aristotle University of Thessaloniki, Department of Mechanical Engineering, IDE and CFT.

In this project IDE is responsible for system integration. Specifically RE-COGNITION envisages a systems’ integration methodology that will be able to quickly and effectively both adapt the RE-COGNITION components and platform to the evolving technological scenarios while taking into account feedbacks and hits coming from the RE-COGNITION pilots. IDE participates also in the design and development of a Cross-Functional RET Integration Platform and in the Small Scale Pilots Realization and Impact Assessment.
The RE-COGNITION project is funded under the framework of HORIZON2020 and is being implemented by a multinational consortium led by Politecnico di Torino.

IDE has participated in a consortium for the development of a Hellenic Civil Unmanned Aerial Vehicle – HCUAV, whose mission is to support civil protection services and public safety in Greece and abroad. The development and the use of HCUAV give significant advantage to the users because it can send images, geo-referencing targets and operational status and pictures in real time.IDE has provided a significant contribution to the program as it was responsible for the electro-optical system, the wireless encrypted communications, the mobile ground station and the intelligent software system with command and control capabilities. Specifically, the HCUAV communications rely on the IDE’s innovative broadband communications system Spart@n which provides sophisticated and reliable network-centric communications in real time. This gives a distinct advantage in situational awareness and acts as a force multiplier and effectiveness at various operations which will use the HCUAV.The HCUAV program has been funded by the General Secretariat for Research and Technology (GSRT) and has been implemented by a consortium consisting of three Universities and two SMEs.