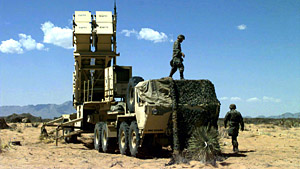 INTRACOM DEFENSE in cooperation with the US Company RAYTHEON participates successfully in the manufacturing and support of the PATRIOT PAC3 Air Defense System.

The cooperation started with the implementation of the Hellenic Patriot Program where INTRACOM DEFENSE undertook the manufacturing of the electronic systems as well as the integration of the main systems (ECS, ICC, CRG, AMG, and DLTM). Through its participation in the Greek PATRIOT program INTRACOM DEFENSE has been established as the only non-US based manufacturer of these electronic systems, obtaining thus the ability to further participate in procurement programs of other interested countries.

In the frame of international contracts from RAYTHEON the company undertakes, manufacturing and testing of systems for the Launcher Station of the PATRIOT Missile System. For the needs of these multi-contracts, the company has developed and qualified a new unique and innovative production line and test stations for the manufacturing of the Launcher Platform Actuators (Linear & Rotary). These subsystems are delivered today as spare parts too, directly to the US Government.

Moreover, exceptionally important is the new 5-year contract with NSPA (NATO Support Agency – former NAMSA) for the maintenance, repair, and support of the PATRIOT systems that are deployed in Europe. This new contract succeeds the successful completion of previous 10-year contract.

The company extended its cooperation with RAYTHEON by signing a new contract concerning the manufacturing of the Antenna Mast Group (AMG) for third party’s needs.

All these years, INTRACOM DEFENSE is honored by Raytheon for its exceptional performance and quality with Supplier Excellence Award.

IRIS-T missile has been designed and is manufactured through international cooperation of six (6) European nations and is considered as the most advanced infrared guided short-range air-to-air missile system worldwide. The program is a successful government-to-government industrial cooperation, in which our country participates as an equal partner from the original design phase. INTRACOM DEFENSE participation is dated since 1998, when the company undertook and successfully completed the design, development and manufacturing of airborne electronic units of IRIS-T namely the Guidance Section Power Supply, the Telemetry Section and the Field Test Equipment.

Also, the company extended its cooperation with German Company DIEHL Defence for the production of crucial electronics missile components of the Ground Based Air Defence System IRIS-T-SLM (Surface launched Medium Range). These missile components have been developed by INTRACOM DEFENSE and were tested with absolute success during extensive trials in the certification phase of the system.

Another multinational co-production of INTRACOM DEFENSE concerns the Evolved Sea Sparrow Missile (ESSM) Program, which has been designed and is manufactured by an international consortium of 11 countries and is considered as a highly advanced medium-range missile intended to provide self-protection for surface ships. INTRACOM DEFENSE has designed, developed and is manufacturing the Telemetry Section entirely in Greece, which is intended for use by all countries participating in the multinational program, in which INTRACOM DEFENSE is active since 1995.

Furthermore, after an international tender, the company undertook the production of additional electronics of missile guidance system for the Block 2 improved version of the surface-to-air ESSM missile.

The high quality standards and capabilities INTRACOM DEFENSE have established the company as a reliable partner in the successful international course of the ESSM missile program.

In the Advanced Self-Protection Integrated Suite (ASPIS II) program of F-16 Block52+ aircraft of Hellenic Air force, INTRACOM DEFENSE participates in cooperation with the US companies RAYTHEON & NORTHROP GRUMMAN. The company is responsible for the production and test of main subsystems as well as for the development of test and control systems. INTRACOM DEFENSE participation in the program has been extended in the co-production of additional units for international clients.

INTRACOM Defense participated, in cooperation with the US company NORTHROP GRUMMAN, in the production of electronic systems of Radar APG-68 (V) 9 for Hellenic Air Force F-16 Block 52+ Aircraft. The company undertook the manufacturing and test of CoRP and MoRE main systems of Fire Control Radar System. The participation of INTRACOM DEFENSE in the program has been extended in the production of additional radar subunits for international clients through a frame contract.

In the ARTHUR WLS program, INTRACOM DEFENSE participated successfully in cooperation with the Swedish company SAAB (former ERICSSON MICROWAVE SYSTEMS) and was responsible for the manufacturing, integration and final testing of the systems at its facilities. It is noted that SAAB assigned to INTRACOM DEFENSE the development of a new telecommunication system for ARTHUR WLS based in the WiSPR technology, which is designed and manufactured by INTRACOM DEFENSE. The WiSPR telecommunication systems have also been installed in the ARTHUR WLS systems, which were delivered from SAAB to the Spanish and Czech Armed Forces.

Manufacturing of electronics, electro optics and communication systems at the company’s facilities, concerning the Main Battle Tank LEOPARD 2 HEL program, was the project that INTRACOM DEFENSE undertook in cooperation with the German companies Krauss Maffei Wegmann (KMW), Hensoldt (former Zeiss Optronik) and Rheinmetall Defense Electronics. It is noted that in the frame of the program special infrastructure (clean room) has been developed at INTRACOM DEFENSE for the manufacturing of thermal camera.

The modernization program of the AWACS aircraft constitutes another opportunity of INTRACOM DEFENSE participation where our company has undertaken development work as well as manufacturing, of electronic units of digital intercommunication system.
In the frame of an international tender, INTRACOM DEFENSE signed an agreement with Boeing and undertook the manufacturing of specialized mechanical subsystems with complex harnesses of AWACS aircraft
Moreover, the company under a contract with Boeing Systems participated in the US Air Force (USAF) AWACS aircraft upgrade program.

INTRACOM DEFENSE in cooperation with RAYTHEON participates in the co-production of the naval close-in-weapon system PHALANX and has undertaken the production and testing of electronic units. These electronic units are manufactured by INTRACOM Defense for series of years.

Participation in the Rolling Airframe Missile System (RAM), in cooperation with RAYTHEON and specifically complete manufacturing of the Infrared Electronics (IR-ELX) system, the main guidance unit of the missile, was the project that INTRACOM DEFENSE has undertaken. In this frame, the company has developed state-of-the-art automatic control stations as well as special processes needed for the robotic assembly of the highly sophisticated electronics. It should be noted that company’s involvement in this program started in 2005, when was assigned the industrialization of the electronics of IR-ELX.

After an international tender, an integration of the Enhanced Control and Display System (ECDS) has been awarded to INTRACOM DEFENSE. The system has been successfully delivered to NATO Missile Firing Installation (NAMFI).
ECDS supports exercises with real ammunition of ground-to-air and ground-to- ground weapons defense systems for the armed forces of NATO member countries and uses state of the art technologies for data processing and geographical display of information. The system interfaces with a large number of peripheral systems and unmanned flying targets and provides to NAMFI operators, in real time, consolidated and reliable tactical image of the field of operations.
The new system has been used with excellent results during the joint air defense exercise conducted by the Armed Forces of Germany and the Netherlands.

The upgrade of the HAWK Air Defense missile system was another successful project in which INTRACOM DEFENSE participated, in cooperation with RAYTHEON and Hellenic Aerospace Industry. The company was responsible for the manufacturing and testing of the main digital Radar and launching system subunits. Furthermore, the company participated in the program in cooperation with the Norwegian company KONGSBERG for the manufacturing of the Fire Control System.

The procurement of the CROTALE NG system gave to INTRACOM DEFENSE the opportunity to participation in another Thales’ defense program. The company was responsible for the production of Radar system subunits and electronic turret subsystems. It is noted that INTRACOM DEFENSE participation has already been expanded in the manufacturing of systems concerning export activities of the French company and are intended for the Armed Forces of various countries.

INTRACOM DEFENSE participates in cooperation with US company NORTHROP GRUMMAN, in the GATS (Generic Automatic Test Station) upgrade program, which is been used by the Hellenic Air force for test of the Radar AN/APG-68(V)9 for F-16 (Block 52+) Aircraft. The company participates in the upgrade of the system and after its completion; it will provided support services in Air force’s facilities as well as training of the personnel using the upgraded system.